TAIPEI — King Yuan Electronics Co., the first Taiwanese tech company to report a cluster of COVID-19 infections, is struggling to relocate hundreds of migrant workers to new housing in line with government requirements for improving its coronavirus prevention measures.

The chip testing company, better known as KYEC, was ordered to reduce the number of migrant workers sharing a dormitory room after hundreds of cases of coronavirus were linked to company earlier this month. Failure to do so means the company — a key supplier to Intel, Nvidia and MediaTek — will not be allowed to fully resume production. KYEC hopes to undergo a government inspection and receive the greenlight to have all workers back on production lines by the end of this week, Nikkei Asia has learned.

The handling of the move, however, has been described as “chaotic” and “inhuman” by workers and others familiar with the situation, while the company itself has acknowledged “flaws” in the process.

The local COVID outbreak in Taiwan threatens to exacerbate the global shortage of chips and components. It also reveals how heavily tech manufacturers rely on foreign workers to keep the island’s flagship chip economy running 24 hours a day.

Taiwan has some 713,000 migrant workers, with 63% employed in the manufacturing sector, Ministry of Labor Affairs’ data showed. Vietnam is the biggest source of factory workers, followed by the Philippines, Indonesia and Thailand. 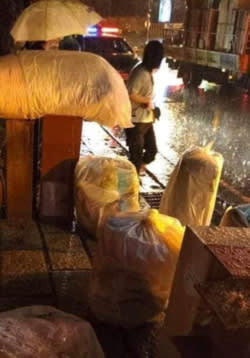 A migrant worker in Taiwan being moved to a new dormitory waits by the road in the rain to load up their belongings on June 22. (Photo courtesy of a King Yuan worker)

Amid heavy rains on Tuesday, hundreds of foreign workers employed by KYEC were forced to move out of their dormitories into new, unfurnished accommodations, some of them late into the night, according to interviews with some of the workers.

“Everything happened so suddenly. Some of my friends’ belongings were wrapped and moved outside of their rooms without their consent while they were still in quarantine,” Jennifer, a King Yuan worker who asked to be referred to by an alias, told Nikkei Asia. “Our precious souvenirs, even gold bars that we saved money to buy, were wrapped by others and dumped outside of the room like garbage.”

The new dorm room, she said, was just 10 sq. meters for six people and did not have any beds.

Cristylyn, another migrant worker with KYEC, described a similar scene. “Many of my friends came back from quarantine and their stuff already was packed and scattered in those plastic bags,” she told Nikkei. “That’s inhuman, to touch our belongings without asking us.”

Video and photos obtained by Nikkei Asia appeared to show workers’ belongings wrapped in garbage bags and piled in hallways and on sidewalks in the rain, while the workers themselves are seen standing in large groups waiting to be relocated.

Gina Lin, a former staff member with the Manila Economic and Culture Office, the de facto Philippines embassy in Taiwan, told Nikkei Asia that several migrant workers she knew at KYEC had told her about the situation.

“It’s very chaotic… KYEC’S HR department formulated a list to ask hundreds of migrant workers to move to a new place within 24 hours, but the new dorm rooms are not ready at all,” she said. “All of them also need to line up outside the new dorm to take a swab test again, which could create new threats of a cluster infection. There was no social distancing at all.”

Lin said KYEC did not send any professionals to communicate with employees and support the move but instead relied on Sheng Hua Manpower Resource, one of the leading agents securing migrant workers for Taiwanese tech companies.

KYEC acknowledged issues in how the move was handled and said it was struggling to meet government requirements to reduce the number of employees in each dorm room. It hopes to resolve the issue as soon as possible, however, and bring back all the workforce by the end of this week.

“We noticed there have been employees’ complaints during this challenging time, and we know there are some flaws that we need to improve and look at,” a company spokesperson told Nikkei Asia. “But we also need to be responsible to restore production as soon as possible given the current global supply constraints.”

KYEC said its own in-house human resources team was already stretched thin trying to ensure the company’s offices and factories were free of COVID threats.

“We’ve already done many PCR tests in June on our thousands of migrant workers and domestic employees and are confident that our employees and factories are safe,” the spokesperson said.

Sheng Hua Manpower Resource was not immediately available for comment.

Separate from the requirements for King Yuan, the government’s Central Epidemic Command Center on June 21 issued new mandatory guidelines for companies to improve pandemic prevention measures in migrant workers’ living and working environment. These include forbidding migrant workers employed by different companies from living on the same floor, a requirement that companies and human resources agencies may struggle to address, as foreign workers from different companies often live together.

The government has given companies two weeks to meet these requirements. Those failing to do so face a maximum fine of 300,000 New Taiwan dollars ($10,709) or the revocation of their permits for hiring foreign workers.

Earlier this month, the government ordered King Yuan to have all of its roughly 2,000 migrant workers — or 20% of its total workforce — stop work immediately and quarantine for 14 days through Monday. They will only be allowed to return to work if their PCR test is negative and if KYEC successfully meets all the government’s requirements regarding social distancing in offices and factories and reducing the number of employees sharing dorm rooms.

King Yuan on June 4 suspended production at all of its manufacturing sites in Taiwan for two days after it reported the biggest COVID cluster in the chip industry. The cluster spread to at least four chip and network companies nearby King Yuan in Miaoli County, bringing the total number of confirmed cases to 545 as of Tuesday, with the majority being migrant workers.

“The cluster infection among tech companies highlights a huge vulnerability in Taiwan’s tech and chip industry as migrant workers are really vital to take those shifts that domestic employees do not want to take,” a human resource expert with a recruitment agency Intelligent Manpower told Nikkei Asia. “Without them, the tech industry will face a huge disruption.”

New scholarship program for children of Thai workers in Taiwan

Employers warned not to hire illegals during holiday period